We’re thrilled to announce that TORA TORA will be guests at ROCKNPOD! 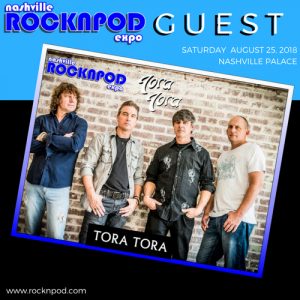 The band has six independent releases, The Warehouse Sessions, Bombs Away, Miss B. Haven, Before and After, Revolution Day, and most recently a live performance concert Live from Minglewood, in Memphis #ROCKOUTCANCER.

Live appearances have been at festivals Rocklahoma, Farm Rock, Rock & Skull and Monster of Rock Cruise.

TORA TORA will be at ROCKNPOD meeting fans, signing autographs, and recording with several of the podcasts on site as they prepare to release their upcoming studio album on Frontiers Records.