We’re thrilled to announce that Taco Mouth will be joining us at ROCKNPOD!

Influenced by The Ramones, The Kinks, MC5, The Runaways, The Clash, and others, Taco Mouth released the EP W.G.A.F produced by the legendary Michael Wagener. A full-length studio album, also produced by Wagener, is due in late 2018. 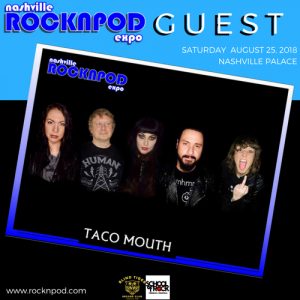