Excited to welcome back Drew Fortier for the ROCKNPOD Expo! 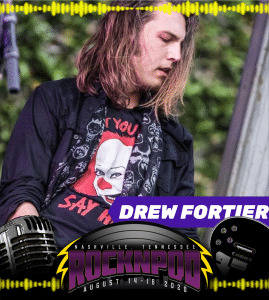 He is also the writer, director, and star of the upcoming found footage horror film Dwellers which is being produced by Thom Hazaert and Grammy award winning Megadeth bassist David Ellefson via their Ellefson Films banner. He is currently also in the midst of writing a fiction novel with David Ellefson called Sledge due out later this year.