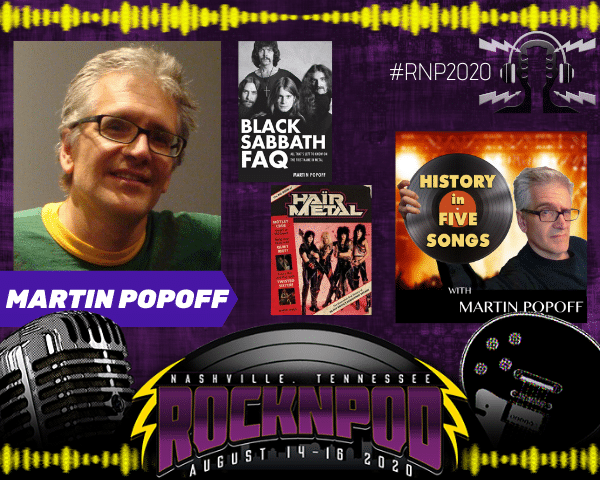 HAS AUTHORED OVER 85 FOCUSING ON HARD ROCK, HEAVY METAL AND CLASSIC ROCK

We’re excited to announce that writer/podcaster Martin Popoff will be joining us at ROCKNPOD!

At approximately 7900 (with over 7000 appearing in his books), Martin has unofficially written more record reviews than anybody in the history of music writing across all genres.

Additionally, Martin has penned approximately 85 books on hard rock, heavy metal, classic rock and record collecting. He is also part of the Pantheon Podcast network, with a show called History in Five Songs with Martin Popoff.

Back when print was a thing, Martin was Editor-In-Chief of the now retired Brave Words & Bloody Knuckles, Canada’s foremost metal publication for 14 years, and has also contributed to Revolver, Guitar World, Goldmine, Record Collector, bravewords.com, lollipop.com and hardradio.com, with many record label band bios and liner notes to his credit as well.

Additionally, Martin has been a regular contractor to Banger Films, having worked for two years as researcher on the award-winning documentary Rush: Beyond the Lighted Stage, on the writing and research team for the 11-episode Metal Evolution and on the ten-episode Rock Icons, both for VH1 Classic.

Additionally, Martin is the writer of the original metal genre chart used in Metal: A Headbanger’s Journey and throughout the Metal Evolution episodes. Martin currently resides in Toronto and can be reached through martinp@inforamp.net or www.martinpopoff.com.

ROCKNPOD Expo on Saturday (08.15) with special guests including current and former members of Tesla, KEEL, Saigon Kick, TNT, with More being added!