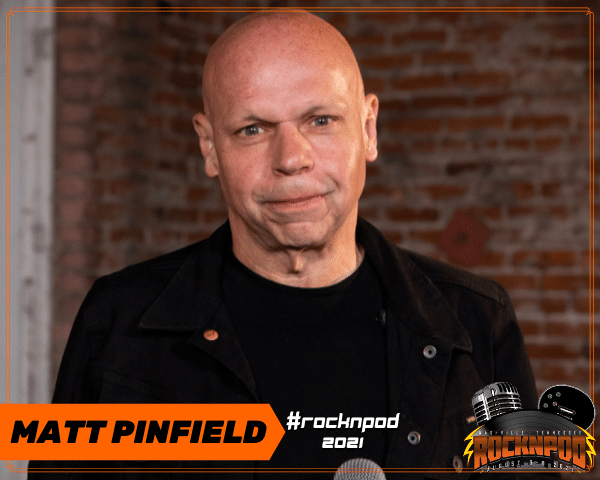 MATT PINFIELD WILL BE AT ROCKNPOD 2021

We’re excited to announce that Matt Pinfield will be joining us for the ROCKNPOD Expo!

Matt Pinfield is a well-respected TV and radio host and music historian and celebrates 36 years in professional radio and 28 years on television. He was the host of numerous MTV programs including the influential alternative show 120 Minutes. He has hosted shows and appeared on many networks including MTV, VH1, MTV2, VH1 CLASSIC, MTV CLASSIC, HDNET, MUCH MUSIC, USA, AXSTV, NICKELODEON, IFC, FX, FOX, CNN, CNN INTERNATIONAL, MSNBC, CBS, NBC, and ABC.

His professional radio career includes an 11 year run at K-Rock in New York City. Morning shows in NYC and San Francisco, 100s of album specials, SiriusXM since its inception, and worked for CBS Radio, Clear Channel/iHeart, Emmis, Cumulus, and syndication through Westwood One where he continues to host Flashback with Matt Pinfield which is in its 9th year and is heard on over 120 FM stations and markets in North America, and around the world on American Forces Network every week. He has won numerous radio programming awards – and has been honored at the Rock and Roll Hall of Fame in Cleveland where his name and show logo is permanently on display in their Rock on TV exhibit.

He has written and published a critically acclaimed memoir through Scribner/Simon and Schuster titled “All These Things That I’ve Done” named after the hit song that Brandon Flowers of The Killers wrote about him. He was elected to the Board of Governors of the Recording Academy and The Grammys and continues to do charity work for many recovery and mental health organizations including MUSICCARES.

He has conducted close to 2000 artist interviews with everyone from Paul McCartney to the Rolling Stones to Ozzy Osbourne and U2. Dave Grohl was quoted declaring “No one on this planet knows more about rock and roll than Matt Pinfield.”

Most recently, Matt continues his radio presence with his weekend show ‘New and Improved’ on KLOS. Additionally, he’s part of the new TV show ‘No Cover’ which features Alice Cooper and Lzzy Hale.

Matt will be on hand at the ROCKNPOD Expo Saturday, August 7th to meet fans, participate in a special panel being planned, and interview with several of the podcasts on-site.