We’re thrilled to announce that Saving Abel will be joining us at ROCKNPOD Expo 2021!

Saving Abel is a Southern rock band with catchy hooks and heavy riffs founded by Jared Weeks and Jason Null. Their first single “Addicted” breaking onto the scene, climbing its way quickly into a cross-over hit from mainstream rock to Billboard Hot 100 and Top 40. With millions of sales under their belt, it’s easy to see how their self-titled debut album charted on Billboard’s Top 50 and became RIAA certified platinum. Their debut album delivered two more #1 singles with 18 days and Drowning (Face Down), across multiple charts and solidified this band’s name in rock.

Their sophomore album “Miss America” did not disappoint and followed down the same path their debut record had set. “Miss America” debuted in the top 25 albums and produced similar charting singles with “Stupid Girl (Only in Hollywood) and “The Sex is Good”.

After five Top 10 Billboard charting releases, Saving Abel went back into the studio for their third record “Bringing Down The Giant”. They released the title track off that album finding success and breaking the top 10 on multiple charts. After nonstop touring and writing for records, their lead singer Jared Weeks took a step back for a much-needed break and to pursue a solo career. Saving Abel went on touring with Null replacing Weeks with singer Scotty Austin. After a 7 year gap, Weeks and Null both felt the pull to revisit songs they had written prior to Saving Abel. Whilst working on their Shade of Grace project, Austin made the decision to depart ways with Saving Abel to pursue his own music. Weeks and Null knew what the next step should be. Weeks reunited with Saving Abel with the immediate release of “Shade of Grace – Twenty Year Songs”.

Saving Abel has received multiple awards from MTV, VH1, Fuse, BMG, and Music Choice. “Addicted” won most played song of the year and has hit over 105 million streams on Spotify and over 200 million as a band. Their tours have included some of the top-grossing tours of all time with bands such as Nickelback, Papa Roach, Shinedown, and Sevendust to name a few.

Saving Abel is currently in the studio recording their forthcoming album with a release of an Essentials record this fall.

Saving Abel will be at the ROCKNPOD Expo Saturday, August 7th to meet fans and do interviews with some of the podcasters that will be on-site. Come out to ROCKNPOD and meet Saving Abel! 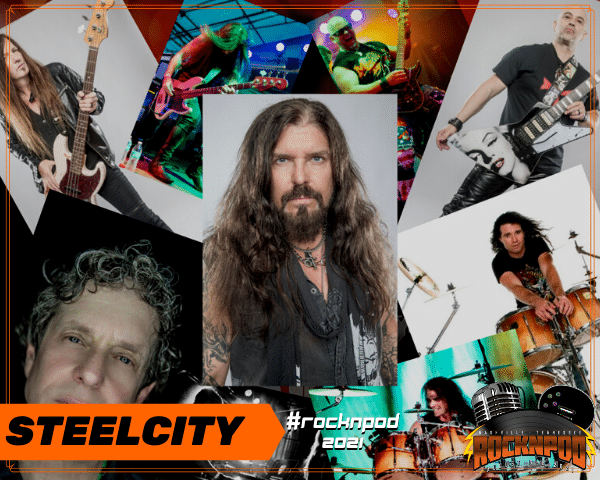 SteelCity Will Be At ROCKNPOD