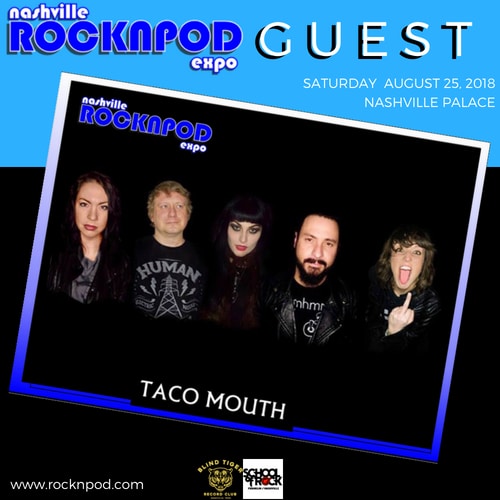 Taco Mouth to Guest at ROCKNPOD!

We’re thrilled to announce that Taco Mouth will be joining us at ROCKNPOD! Formed by members of The Dead Deads Erica Sellers and Angela Lese, Taco Mouth also features Shawn Hammer, Flip Cooper (Rearview Ghost), and singer Erica Dilanjian (Lady E and the Black Light, En Esch, Lords of Acid). Influenced by The Ramones, The Kinks, MC5, The Runaways, The Clash, and others, Taco Mouth released the EP W.G.A.F produced by the legendary Michael Wagener. A full-length studio album, also produced by Wagener, is due in late 2018. Meet Taco Mouth at ROCKNPOD! $10.00 gets you in the door! Other guests at ROCKNPOD include current/former members of Angel, KISS, STARZ, Tora Tora, Korn, Winger, Accept, Loudness, Keel, Joan Jett, Kik Tracee, Bang Tango, and...