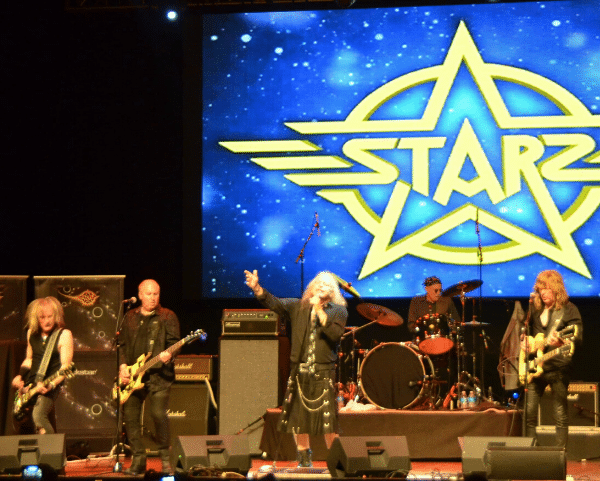 STARZ will headline the ROCKNPOD Preparty Concert Friday August 14th at Mercy Lounge. This will be their first Nashville appearance since 1976! The following day they’ll appear at the ROCKNPOD Expo at Hilton Nashville Airport for an on-stage panel and to meet with fans!

During the Seventies when disco and punk were the rage, only a handful of bands were daring enough to play hard rock and heavy metal music. “You could almost count those bands on one hand,” said Starz lead guitarist Richie Ranno. “They were Aerosmith, KISS, Queen, Ted Nugent, Starz and Angel. We kept the flame alive between the original hard rock groups and heavy metal today.”

All together Starz recorded four studio albums, Starz, Violation, Attention Shoppers, and Colesium Rock and gathered critical acclaim with their ability to mesh the smooth with the hard. “We loved pop melodies,” admitted Ranno in retrospect, “and we also loved heavy guitars. We liked to combine hooks with a harder edge. Our singer Michael Lee Smith had a great     sense of melody. In the course of four albums, we only used orchestrations or keyboards once, preferring to mix heavy rock productions with melodic overtones.”

Their success has been documented in the historical chapters of hard rock and heavy metal. In Kerrang’s critical listing of the 100 greatest heavy metal  albums of all time, Starz was listed at #94, with Violation at #84.  In a similar poll in Hit Parader magazine, Violation was listed at #82. Starz’s greatest asset was their live performance and until a chance meeting between  Metal Blade’s founder and Starz guitarist Richie Ranno, one of rock’s greatest secrets was buried in the archives. At the height of their career, Starz released a special”radio only” live record intended for broadcast, but not licensed for sale. It was called Live In Louisville and only a scant 2,000 copies were pressed. It was heralded by Kerrang as the greatest live record never released!

“One day” Richie said, “out of the blue, I got a letter from Brian Slagel, who wrote that he was a big Starz fan and was interested in re-releasing the Starz albums for the first time on CD. He asked if I owned the liscenses to any of the records, and I told him I had the rights to the live record.” Starz Live In Action is a combination of the famous Live In Louisville performance recorded in 1978 with another concert taped in Cleveland in 1977. Together it is over sixty-five minutes of classic Starz music, covering songs from all four studio albums and the famous     “Waitin On You/Colesium Rock” medley which includes a clever collection of the greatest     rock guitar riffs of all time.

“We always considered ourselves a live band,” Richie confessed. “In fact, we toured with Peter Frampton in major halls before we even had any product to sell! We felt confident that we could get any audience up on their feet and got encores wherever we played.” This same spirit is captured on Starz Live In Action. If you are a Starz fan, this special recording is a must for your collection. If you are unaware of this great band, consider these thoughts. Many of the Eighties most successful bands were influenced by Starz, from Cinderella and Poison to Bon Jovi and Mötley     Crüe. Tom Keifer said the first concert he ever went to was a Starz show… “They     really kicked ass,” he remembered. Jon Bon Jovi met guitarist Richie Ranno backstage at a Bon Jovi concert in New Jersey and took the time to tell 30,000 screaming fans that when he was young, he looked up to Starz. They were the band he imitated when practicing in the garage. In Jon’s words, “What ever your dreams may be, always shoot for the Starz!”